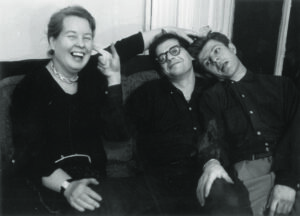 In conjunction with its current retrospective, Alice Neel: Painter of Modern Life, the Fondation Vincent van Gogh Arles invites you to an open-air screening of Pull My Daisy (1959), the cult film of the Beat Generation, which will be shown in the entrance courtyard.

Alice Neel appears in the film alongside other leading lights of the contemporary New York art, music, literature and photography scene.  The film exudes a spirit of friendship, infectious fun and improvisation, but was in fact carefully planned and rehearsed by its two directors, Alfred Leslie and Robert Frank. Off-screen, Jack Kerouac delivers an impromptu narration over the top of previously shot and edited scenes, telling the deceptively rambling story of a gathering of friends in a New York apartment.

1959
In English, without subtitles

16 mm film, in black and white
Running time: 30 minutes
Directed by Alfred Leslie and Robert Frank
Adapted by Jack Kerouac from the third act of his play Beat Generation