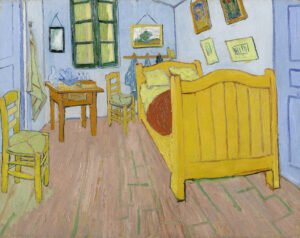 Voyage around The Artist’s Bedroom

François Halard is a photographer. He divides his time between Arles and New York. He has produced books and photographic series on artists and their world as seen through their portraits and private lives, with subjects including Cy Twombly, Robert Rauschenberg, Paul Cézanne, Miquel Barceló, Joan Miró and Louise Bourgeois.

François Halard looked at several paintings by Van Gogh, including The Artist’s Bedroom and Vincent and Gauguin’s Chairs, and examined the links between painting, psychology, photography and the interiors inhabited by the two artists. He also analysed Van Gogh’s feelings on the basis of the items decorating his bedroom and the two chairs. Creating a portrait of the occupants of the interiors that he photographs constitutes the essence of François Halard’s work.