To accompany the current David Hockney exhibition The Arrival of Spring, the Fondation Vincent van Gogh Arles invites visitors to discover the connections between the life and work of the British artist, as well as the importance of the people around him, in the following three films: A Bigger Splash by Jack Hazan (1974), Hockney by Randall Wright (2014) and David Hockney in perspective by Pierre Saint-Jean and Monique Lajournade (1999). 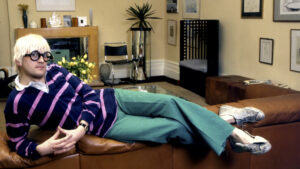 How did a boy whose earliest memories are of bombs landing on his native Bradford (David Hockney was born, we should remember, in 1937) and who probably felt cramped in the family home as a result, become an artist as talented as he was irreverent towards the dominant trends in American art and the mores of his epoch?

For answers to these questions, the documentary Hockney draws upon the artist’s personal archive of photographs and videos and interviews his family and friends (including Ed Ruscha and Celia Birtwell). From his first works, produced while a student at the Royal College of Art in London, to his recent iPad drawings in digital colour, we discover an artist who, at 77, is as courageous and charismatic as ever.