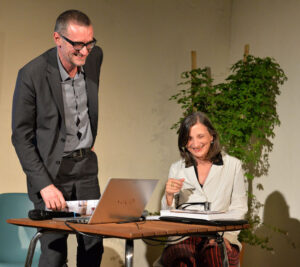 Following on from “Van Gogh Live! 2013”, the Fondation is delighted to announce this summer’s programme of four events complementing its inaugural exhibition: a conversation between Thomas Hirschhorn and Bice Curiger, two musical performances by the artists Fritz Hauser and Michael Glasmeier and a screening of The Man directed by Ragnar Kjartansson.

Thomas Hirschhorn will be talking to Fondation Artistic Director Bice Curiger about his Indoor Van Gogh Altar, a work conceived as an homage to Van Gogh and specially created in situ for the Fondation’s inaugural exhibition.

For more than 30 years, Thomas Hirschhorn (born in 1957) has been developing a political oeuvre based on everyday materials such as cardboard, aluminium and adhesive tape. His installations are often monuments dedicated to thinkers, challenging notions of power, justice and moral responsibility… 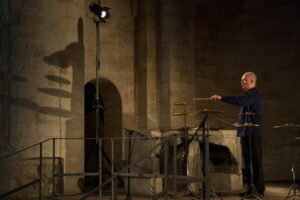 In a resonant echo of Hachures, his sound and visual installation at the Fondation Vincent van Gogh Arles, Swiss percussionist Fritz Hauser (born in 1953) presents a solo concert of drum and percussion in the church of Saint-Honorat in Arles. Hauser has been an innovating force in percussion music over the past few decades, developing new playing techniques and expanding the range of percussion instruments. He has realized musical projects in different styles with international partners, in a repertoire that ranges from pop to improvisation and from John Cage— who wrote a piece specially for him—to his own compositions for chamber orchestra. Hauser’s music, although difficult to define, is quite simply unique.

For this master mixer of musical genres, percussion is an activity that inscribes itself more broadly within gesture, space, light, dance and architecture.

Fritz Hauser presents his solo programmes for drum and percussion all over the world and has recorded numerous CDs.

In the video The Man, American Blues musician Pinetop Perkins (1913–2011) is seen playing the piano alone in the middle of a field, a cigarette in his mouth.

It is an image that evokes a painting, and the solitary individual in a wheat field is undoubtedly an emblematic Van Gogh figure.

Perkins, who was into his nineties when the film was made, appears here as the living witness to the traditional Delta Blues. One last time, and purely for himself, he puts on a performance from the past—not on a classic indoor stage but in complete solitude and under the diffuse lighting of an open sky.
Ragnar Kjartansson (born in 1976) is an Icelandic artist-performer who is also a painter, sculptor and musician (he is a member of the band Trabant). He has made a name for himself in recent years with his spectacular performances and theatrical installations, in which repetition and emotion play a foreground role. 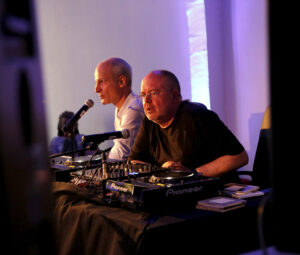 Everyone knows what a DJ is. But what if, instead of the latest tracks, the DJ plays music written 400 years ago, looped with a contemporary and relevant touch?

Joys and raptures, tears and sorrows, jubilation and crazy love lie at the heart of Michael Glasmeier’s CD recordings, whether recent or old. Glasmeier thereby explores the role of rhythm, repetition, variations and loops in a music that is situated between lamentation and ecstatic dance.

Michael Glasmeier (born in 1951) is an art historian with a punk past and the author of numerous publications. He presents rediscovered gems of Baroque music in a relaxing area, fitted out for the convenience of listeners.