‘VAN GOGH LIVE!’ was the title of the opening exhibition of the Fondation Vincent van Gogh Arles.

On the one hand, it presented ‘Colours of the North, Colours of the South’, the first of a planned series of exhibitions about Van Gogh, curated by Sjraar van Heugten, and, on the other, it featured contributions by Guillaume Bruère, Raphael Hefti, Thomas Hirschhorn, Gary Hume, Bethan Huws, Bertrand Lavier, Camille Henrot, Fritz Hauser and Elizabeth Peyton, who have been invited by Bice Curiger.

On entering, BERTRAND LAVIER’s door, displaying Vincent van Gogh’s signature, appears as an initial sign of recognition from the building of the Fondation Vincent van Gogh Arles. A second—RAPHAEL HEFTI ’s agglomerates of sparkling, multi-coloured glass on the translucent roof—evolves imperceptibly with the changes of daylight, playing on constantly new kaleidoscopic variations.

The major theme of this first in a series of exhibitions devoted to Van Gogh, ‘Colours of the North, Colours of the South’, retraces the evolution of his palette from darkness towards southern brightness, and presents some of his works alongside those of his contemporaries who had a decisive influence on him: Courbet, Pissarro, Monet and Monticelli, among others. This exhibition, which includes a dozen Van Gogh pieces, occupies the main hall on the first floor of the renovated building.

An important aspect of the presentation of the Van Gogh exhibition has been entrusted to the British artist GARY HUME: the choice of the colouring of the walls. As a refined colourist—a fact which his paintings amply attest—Hume thus establishes a genuine artistic dialogue with Van Gogh.

Van Gogh embodies a widespread myth of the artist, which is particularly present in popular culture. It is thus a strange twist of fate to see this supposedly solitary, misunderstood figure become a perfect example of an artist who can be “grasped by all”! Or else, in the words of Thomas Hirschhorn , the creator of an art for a “non-exclusive” public. In this respect, Van Gogh’s great popularity in Asia is highly significant: one of its main sources lies in the close study he made, at the turn of the nineteenth century, of Japanese artistic forms.

At the same time, Van Gogh personifies certain values which we still use today as markers. Hirschhorn calls them “autonomy” and “strength of transformation”. Whatever the case may be, such values are profoundly anchored in the modern conception of art.

For his new, large-scale piece in Arles, THOMAS HIRSCHHORN has projected himself into a young Japanese woman of today, who is obsessively fascinated by Van Gogh. For Thomas Hirschhorn, being a “fan” is an expression of positivity, a posture of love and an absence of prejudice. It is the opposite of nihilism and negativity. But it is also an act of resistance. Because this young woman, in a world where others enthuse about brands and consumption, has chosen Vincent. And so she finds herself in a chaotic situation of seeking out his essence, which slips out of view whenever she approaches it.

“Artists interpret the world and then we interpret the artists ”, proclaims a neon by BETHAN HUWS. Though produced outside of the context of “Van Gogh Live!”, this statement seems tailor-made for Van Gogh. It describes the sort of hiatus and switching of perspective from which art draws its lasting strength. With Bethan Huws, we wonder to what extent the worlds of Vincent (as he signed his pieces in Arles) and of us, his public, have changed over the uninterrupted history of his influence. And into what conditioning we have drifted, when it comes to perceiving his oeuvre.

And when Bethan Huws’ glass-cases, with their “boats” made of rushes, are presented alongside Van Gogh, they may seem to some to be like cross-hatchings, lines that have become three-dimensional, or like a mischievous game that escapes from any genre: drawing or sculpture? To extend such questionings, Bethan Huws’ film ‘ Zone’ brings to mind Duchamp, for its captured shots of birds are just like “ready-mades”, presented by the artist as her interpretation of Apollinaire’s poem.

GUILLAUME BRUERE, alias GIOM, draws, while giving this form of expression an elementary appearance. His lines are agitated, vibrant and immediate, and the intensity of his colours also gives his work its great and varied expressive power. Without sacrificing to outmoded conceptions of expressiveness, Bruère has adopted drawing as a pictorial instrument, in a quest for a communicative friction with life—and with the public.

In the paintings of ELIZABETH PEYTON, intimacy and the evocative strength of the images also play a vital role, while deploying a subtle feel for psychology and atmosphere. Our attention is mainly drawn by her humans, flowers or still-lifes. These pieces’ rather small formats bank on the fact that they can develop into the power of glistening gemstones.

Schraffur, (‘Hatchings’) is the name that the percussionist FRITZ HAUSER has given to an important part of his work. For this exhibition, he has conceived a sound installation for the staircase of the  Fondation. Here, the hatchings have been made on the very silvery paint of the walls, with a variety of points, but also by quite literally using “scratchings” or “engravings”. The sounds and noises thus produced were recorded, then mixed, thus forming a sound installation in the stairwell. It then resonates as a sonic paraphrase of the engraving by the Japanese artist Utagawa Hiroshige, ‘Sudden Shower Over Shin-Ohashi Bridge and Atake’ (which Van Gogh himself paraphrased in one of this paintings) by playing on associations with rain.

In an interview 1, CAMILLE HENROT  cites Van Gogh as a great source of inspiration, especially from the gestures he fixed in his paintings with their inner, physical agitation. In her ‘Dying living woman’ (2005), an adjusted “found footage”, the female character is constantly being obscured by the addition of scratches, “like a flame marking an absence”, which, in their form, also recall Van Gogh’s trees.

There remains the question as to whether there is an inner core that can be approached, a question comparable to the one raised by Camille Henrot in her Ikebana work: ‘is it possible to be a revolutionary and like flowers?’ Does this reside in the still-vibrant force of attraction and the genuine, ever-thrilling pleasure in seeing that Van Gogh communicates to us, as he put it in a letter to his brother Theo on 25 September 1888? “While autumn lasts, I won’t have enough hands, canvases or colours to paint all I see that is beautiful.” 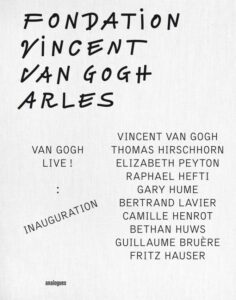