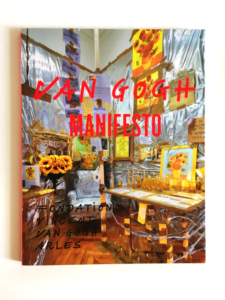 To consider Van Gogh in dialogue with contemporary art.

To take a fresh look at the past, by liberating the artists and artworks that have been tamed, classified and placed in labelled boxes.

Drawing from contemporary art, avant-garde artists who have made their mark on art history and even the popular arts, the Fondation Vincent van Gogh Arles presents exhibitions that, like cinematographic montages, bring together what is normally kept apart. The premise of this hybrid space is not artistic purity; to the contrary, it strives to produce something “impure”, to bring about a clash or an unexpected complicity.

VAN GOGH MANIFESTO looks back over the curatorial work of Bice Curiger, led by one desire: to sharpen our gaze on art and the world, enlivening it with renewed vitality.

Celebrating the fifth anniversary of the Fondation Vincent van Gogh Arles, VAN GOGH MANIFESTO invites you to discover a unique artistic site through exhibition photographs, chronologies and original texts. Jean de Loisy, Suzanne von Falkenhausen and Bice Curiger describe their relationship with the Fondation and outline the artistic and philosophical paths taken since 2014.

Bice Curiger, artistic director of the Fondation Vincent van Gogh Arles, is an art historian and curator. She was co-founder and editor-in-chief of Parkett, published from 1984 to 2017, curator at the Kunshaus Zürich from 1993 to 2013, and served as the director of the 54th Venice Biennale in 2011.

Susanne von Falkenhausen, professor emerita of modern and contemporary art history at Humboldt University, Berlin, does not consider herself an art critic. All the same she writes about art, its autonomy, and dependencies, aesthetics, media and politics.

Jean De Loisy is an art critic and independent curator. Director of the École Nationale Supérieure des Beaux-Arts in Paris, he has held various positions in several artistic institutions, including that of president of the Palais de Tokyo from 2011 to 2018, and has participated in many exhibitions.