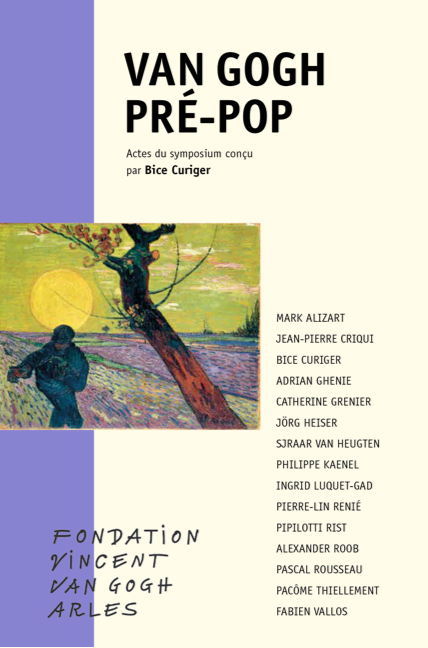 “Pop” can mean many things, but it refers aboveall to the “culture of the greatest number”. Curators, histirians, art experts and contemporary artists have used the enormous popularity of Vincent van Gogh as a starting point tu study and reflect upon the ways in which mass culture made its way into the work of the Dutch painter and continues to infiltrate it.

Like Gustave Doré or Robert Delaunay before him, Van Gogh was interested in the objects resulting from new technologies in image reproductionin the second half of the 19th century-portfolios, decorative images and illustrated journals-and their pictoral universe. He was inspired as much on a formal level as by the content, even when his own art turned towards the avant-garde.

From lithography to pixels, from Van Gogh to Iggy Pop, the proceedings from this second symposium, all informed by the powerful sociocultural weight of the term “Pop”, delve to current issues neglected by a history of art centred around style and form.

After “Van Gogh-Duchamp: Oil and Water?” the symposium “Van Gogh pre-Pop”, organized in March 2017, is the second opus in a series presented by the Fondation Vincent van Gogh Arles.