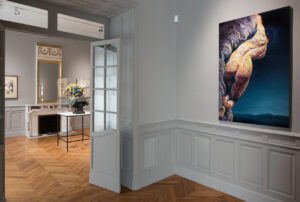 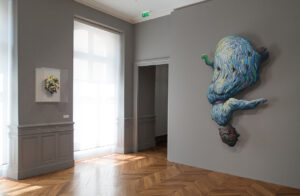 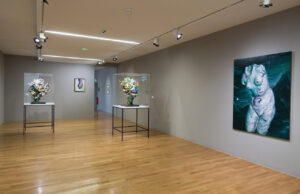 Among contemporary British artists, Glenn Brown is one of the most unusual and most unique. After completing his MA in 1992 at London’s distinguished Goldsmiths College, he struck out against the prevailing artistic current. At this epoch painting – and figurative painting even more so – was viewed as the poor relation among the media available to modern art. While his contemporaries were asking themselves the question “Why bother painting?”, Glenn Brown chose to make the brushmarks of earlier masters, such as Vincent van Gogh, the subject of his paintings.

This summer the Fondation Vincent van Gogh Arles pays tribute to Glenn Brown with a major retrospective bringing together some thirty works. This event marks an important milestone, not only because it has been 16 years since the last retrospective of the artist’s œuvre was held in France in 2000, but also because the exhibition unites all three media in which Glenn Brown is today active: painting, sculpture and drawing.

Since 2013 Glenn Brown has pursued drawing as an autonomous means of artistic expression, in graphic works whose surfaces are covered with an ensemble of marks and sinuous lines that interweave and reply to each other. His drawings also maintain a thematic and visceral relationship with his paintings and sculptures. These latter deploy brush strokes that have been liberated from the flat surface of his paintings and which now constitute condensed agglomerates in a medley of hues laid down on top of a base of bronze. The three new sculptures created by the artist for the exhibition “Suffer Well” may be read as 3D translations of the brushmarks of Frank Auerbach and of the misleading and dated colours of reproductions of works by Vincent van Gogh. One such reproduction, showing Field with Irises near Arles (of which the original painted by Van Gogh in 1888 can be seen in our other exhibition), provided the palette of Glenn Brown’s 2016 sculpture The Flowers of Arles. This profusion of tactile matter dialogues with the artist’s canvases which, although entirely smooth, likewise give the impression of an interplay of textures and feverish visual masses.

It is thus that Glenn Brown’s art reveals the subjective force of his translations of reproductions of works by earlier masters, his atomization of painting, and the inexhaustible inventiveness of his practice, which appropriates the styles and colours of drawings and classical paintings. Emanating from his works – whether drawings or paintings – is a plural, blurred and fluid reality, whose visual ambiguity evokes that peculiar to our own digital epoch.

The exhibition borrows its title “Suffer Well” from a song by the group Depeche Mode, as well as from one of the paintings on show, whose motif is constructed from the famous Head of a Skeleton with Burning Cigarette (1885/86) by Van Gogh. Glenn Brown’s practice is fuelled by this same interweaving of “dissonant” references, ranging from the Baroque to German realism, from new wave music to the genre of horror – and passing, of course, via the works of Van Gogh, which the artist examines with the keen eye of a goldsmith.

Curator of the exhibition: Bice Curiger

Born in 1966 in Hexham (Northumberland), in the northeast of England, Glenn Brown lives and works chiefly in London. In 1989 he took part in the touring exhibition “New Contemporaries”, dedicated to emerging young artists working in Britain. Three years later, he completed his MA in Fine Art at Goldsmiths College in London.

Since the start of his career, Glenn Brown has interrogated the originality of the artwork and affirmed his intention to “paint paint”. He is influenced by the practices of Sigmar Polke and Gerhard Richter, who used photography and the printed image to evolve a new kind of painting in an epoch that seemed to have pronounced the medium dead. Thus Glenn Brown looks at photographs and other reproductions of paintings and drawings, and proceeds to subject them to a unique transformation.

His entire art is based on innovative methods of appropriating and reconfiguring works belonging essentially to the past. In his first solo show in France, for example, held in 2000 at the Centre d’art contemporain at the Domaine de Kerguéhennec in Bignan, the artist presented paintings imprinted with multiple references to the works of Salvador Dalí, the Neo-Expressionist portraits of the British artist Frank Auerbach, and illustrations issuing from the universe of science fiction. There as here, Glenn Brown showed sculptures conceptually related to his works in two dimensions. But while these latter exude the deceptive air of being textured, they are in reality characterized by absolute flatness, each stroke of paint being executed with an extremely fine brush of the type commonly employed in the sphere of vehicle bodywork repair.

Thanks to his perfect mastery of the trompe-l’oeil technique, Glenn Brown succeeds in infusing his pictures with the illusion of depth. His use of a slightly garish palette, combined with a proliferation of marks and lines of all kinds, confers upon his works an expressive, reinvented classicism, a subjective mannerism, which continues right up to the present.

Glenn Brown’s work has been the subject of numerous exhibitions with evocative titles both in Britain and abroad, signalling his role in the renewal of contemporary painting: a painting that looks at the history of western art in order to “digest” and “transform” its given styles, and subsequently to produce a psychological content and an idiosyncratic universe. 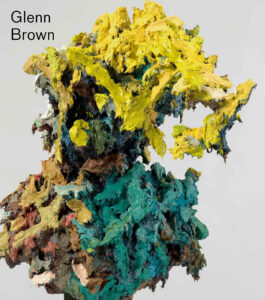