The major exhibition devoted to Urs Fischer, born in 1973 in Zurich, will be unveiled to the public on 1 October 2016. “Mon cher…” will run at the Fondation Vincent van Gogh Arles for four months and aims to offer a panorama of Fischer’s artistic production since 2013: monumental as well as more intimate sculptures, paintings on aluminium panel and wallpapers. The whole is thereby inscribed within a dynamic circuit involving the movement of the visitor.

Above and beyond the power of Fischer’s organisation of space, as demonstrated, for example, by the deluge of oversize multicolour raindrops in his 400 m2 installation Melodrama (2013), the singularity of this show derives from the fact that the totality of the museum’s spaces is devoted to a single artist. Generous, ironic and arousing our empathy, Fischer’s works punctuate a route that traverses the most atypical spaces, including the front courtyard and the wood-panelled study. Among them also appears Undergrowth (1889) by Vincent van Gogh, the annual loan from the Van Gogh Museum in Amsterdam.

Urs Fischer’s œuvre is marked by an extraordinary tension between, on the one hand, the notion of individuality and the collective, and on the other, the evocation of traditional sculptural formats and the production of works in two dimensions in the postdigital era. This oscillation between two poles sometimes results in their overlapping, so that the visual illusion normally associated with the medium of photography also becomes a property of sculpture.

In front of last supper (2014), a doubt emerges as to the material used. The sculpture, which is more than seven metres long, looks as if it has been modelled out of clay; it reveals the collective effort solicited in the making of the initial work, presented at The Geffen Contemporary at MOCA in Los Angeles in 2013. In a process of ennoblement that has preserved the traces of the sculpture’s genesis and the fingerprints of each participant, however, the clay has turned to bronze. The same shifts seem to operate for the eight bronze casts of reclining female nudes. Don’t they make us think of a collective sculpture studio at a fine arts academy, whose models and students have departed? All that remains are pieces seemingly still in progress – the non finito of works anchored in the past and turned towards a future. Replying to the “collective subjectivity” that infuses these sculptures, with their sensual and archaic materiality, are images characterized by hyperreality and self-portraiture. These paintings on aluminium depict parts of the artist’s body – the ear or, as in Barium (2016), the eye – encircled by silkscreened layers of coloured paint, giving the trompe-l’œil effect of impasto.

Weaving itself through the works on display is the reference to Van Gogh – whether in the title of the exhibition, the emotional charge carried by three-dimensional relief, the affirmation of highly studied colour or the ambivalence contained in the self-portrait.

Urs Fischer is a contemporary Swiss artist born in 1973 in Zurich. Since 2004 he has lived and worked in New York.

He studied photography at the Zurich Schule für Gestaltung and subsequently in Rotterdam, a training which forged his “taste for images and their intrinsic value”1.

For the artist, images are admired for their associative power, their emotional charge and their skilful illusion, properties that likewise apply to his objects in three dimensions. Thinking resolutely as a sculptor, he alternates between photography, sculpture, painting and installation. He combines this raft of artistic options with editorial projects implemented with his publishing house Kiito-San.

The exhibition space also finds itself reshaped and is understood as a place of production invested with Fischer’s expressive formal investigations, which oscillate between the playful and the dramatic. Far from operating in isolation, the artist sometimes organizes participatory situations, in which visitors are invited to contribute to the fashioning of sculptures from blocks of clay. Fischer’s most recent collaborative outdoor project is also the largest to date: this summer the artist transformed the exterior spaces of Moscow’s Garage Museum of Contemporary Art into a giant clay-modelling studio.

As well as using natural, easily biodegradable materials such as clay, Urs Fischer also invokes innovative techniques that testify equally to his thirst for experimentation. A prolific artist, he has successfully captivated the international scene. He exhibits in many countries and his work is represented in leading public and private collections around the world. 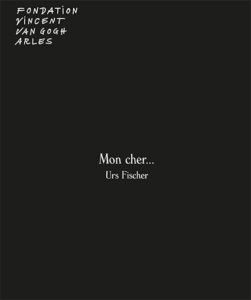