Dan Perjovschi has marked the walls of the Fondation with his black marker pen in the context of the current exhibition « La Vie simple – Simplement la vie / Songs of Alienation ».
Next Thursday, the 15th of February 2018 at 7pm, he’is coming back for a conference followed by a discussion with the audience.

DAN PERJOVSCHI
Dan Perjovschi was born in 1961 in Sibiu, Romania. He lives and works in Bucharest, mixing drawing, caricature and graffiti in a satirical commentary on the current political, social and cultural situation. His practice has its roots in his work as a press cartoonist in the early 1990s in post-Communist Romania, where he developed his style of rapid and incisive drawing with a generous dash of dark humour. After initially working on paper, for the past decade Perjovschi has been executing his drawings directly on the walls, floors and windows of the galleries and museums in which he exhibits, treating them as an extension of his sketchbook. 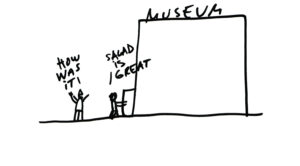 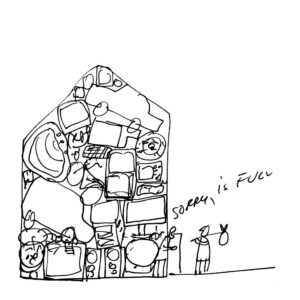