The exhibition Calm and Exaltation. Van Gogh in the Bührle Collection presents eight paintings by Vincent van Gogh. This selection allows us to see not only the different phases in the Dutch artist’s career, but also the vision of a collector, the Swiss industrialist Emil Bührle (1890–1956), for whom it was crucial that his collection should convey the stylistic development of each artist represented within it. Thus the thread running through his dazzling acquisitions of works by Van Gogh is the lightening and brightening of Vincent’s palette and his synthesis of different influences in his art. The Fondation Vincent van Gogh Arles has been granted the loan of six canvases from the Foundation E. G. Bührle Collection, Zürich, which holds in all seven works by Van Gogh. These six canvases are presented here alongside two other loans.

The Old Tower (1884) and Peasant Woman, Head (1885) are early works painted in the Dutch town of Nuenen, while Bridges Across the Seine at Asnières (1887) and Self-Portrait (1887) date from the artist’s time in Paris, where he was inspired by Impressionism and Pointillism. Lastly, The Weeders and Blossoming Chestnut Branches (both 1890) testify to the artistic maturity that Vincent attained at the end of his career. In Blossoming Chestnut Branches, Van Gogh shows us the exaltation of spring. The brushwork is resolutely energetic, the colours vibrant and the composition bold in its horizontality. Vincent’s extended stay in Provence is represented by two loans respectively issuing from a private collection and the Van Gogh Museum in Amsterdam. Although the clear light and bright colours of the South found their way into his paintings of this period, in Entrance to a Quarry (1889) Van Gogh returns to the more sombre palette he had favoured in the North. With Olive Orchard (1889), likewise painted in the countryside around Saint-Rémy, one of the artist’s favourite Provençal motifs takes its place in the exhibition.

Vincent van Gogh is born on 30 March 1853 in Groot-Zundert in the Netherlands. At the age of 16 he joins Goupil & Cie, a firm of art dealers in The Hague, and subsequently works in the company’s offices in Brussels, London and finally Paris. He gradually loses interest in the commercial art world and, in 1878–79, he becomes a lay preacher in a mining community in the Borinage area of Belgium.

In August 1880 Van Gogh decides to become an artist. He wants to be a painter of everyday life, and, above all, of peasant life, following in the footsteps of artists such as Jean-François Millet. Landscapes and still lifes, too, become an important part of his oeuvre. In 1886 in Paris he discovers Japanese prints and he meets Impressionist artists.

Convinced that colour is the key to modernity, Van Gogh leaves for Provence in search of bright light and vibrant colours. Dreaming of establishing a community of artists, in February 1888 he settles in Arles. Gauguin joins him in October, but their collaboration collapses in late December 1888. Disappointed and ill, in May 1889 Van Gogh has himself admitted to a psychiatric hospital in Saint-Rémy, where he remains for a whole year. He continues with his search for an expressive art based on colour and brush strokes, creating more than 500 paintings and drawings during his 27 months in Provence.

In May 1890 Van Gogh moves to Auvers-sur-Oise, where in just over two months he produces the final 70 paintings of an oeuvre that comprises more than 2,000 works. He dies on 29 July 1890 at the age of 37. Van Gogh’s artistic genius and the poignant story of his life transform him into a veritable international icon. 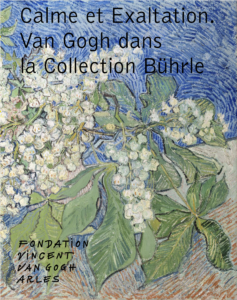 Calm and Exaltation. Van Gogh in the Bührle Collection